She slowly walked through the house trying to take all the memories in, trying to hold back the tears but the emotions started to take over. The house that she grew up in, raised her daughter, lost her mother and became a woman in was being sold.  A young couple ,who had wanted to live near the coast , had been excitedly measuring for furniture and picking paint colors trying to be discreet. She tried to smile remembering too when she had moved in and covered all the chairs and sofas in faded florals and painted every piece of furniture in pastels and white. Trying to make it hers after her mother had passed away had been hard, but after the initial shock of painting the rooms white, she grew braver and bolder than she had ever thought possible. It was exhilarating, she was becoming her own person, finally the true Carolina Jamieson began to emerge from the rubble of life. She was named after the Carolinas where her parents were born and raised, her mama being from South Carolina and her long deceased daddy was from North Carolina. She had brought her baby daughter home when her marriage had ended abruptly and raised India there in the big, old clapboard house on the coast of North Carolina . India had flourished there on the coast, playing in the sunshine and dunes and grew to be a healthy, tanned, lovely young woman. She had loved the  old house too, but she was young and she had her whole life ahead of her. She had packed her bags and tearily said goodbye to Carolina and had started out on her big life adventure . As it should be. Carolina thought about her mother and father who had moved in after his mother had passed away. It was a house of cool breezes, stacks of books read and waiting to be reread , and straw mats on the floors. In the winter months, the oriental rugs would be pulled out and the fireplaces lit and life would be very cozy there on Front Street. Carolina was grateful for the protection and love that she had experienced there in the house and knew that the young couple that would be moving in shortly would be very happy there too. But it was time for her to go, to find her new place in the world, time to take that leap of faith and  share this old home with others . She opened the screen door and the breezes brought in the sweet smell of jasmine and gardenias, a good bye gift for her. The palm trees and palmettos waved their good byes as Carolina slowly walked to the car and looked back one more time. For an instant, she thought she saw a figure in the window watching and then it slowly stepped back. She rubbed her eyes, smiled and turned back to the packed and waiting car. She knew that saying goodbye wasn’t necessary, because a little part of her would always be there in that old house that she had loved and had loved her back so well.        The End 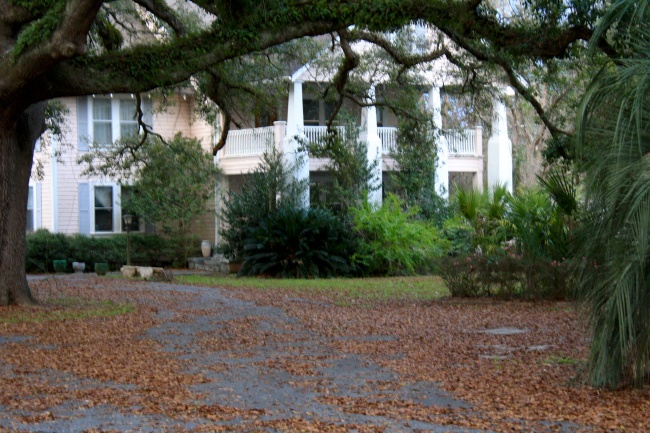